﻿ What to see around the Split area

# What to see around the Split area

We bring you a list of the most famous sights and locations you need to visit if you are in Split or in the surrounding towns in the region of Central Dalmatia or where to find apartments in Split.

Attractions and things to do in Split Croatia

Diocletian's Palace If we mention Split in any context of history, culture or even today's appearance of this city - we can all agree that our thoughts will dominate Diocletian's palace. Diocletian's Palace is an ancient palace of Diocletian's Emperor in Split. It was built around 300 years during the rule of the Roman Emperor Diocletian. Diocletian stayed in the palace after retirement from the throne (305) until his death (316). Prokurative, or officially the Republic Square, is a prestigious Mediterranean square in the center of Split. It is located west of Diocletian's Palace and is known as the stage for cultural events in the town of Marjan. This is where the traditional Split Entertainment Festival is held for almost fifty years. 
Splitska riva has taken its present form in the early 19th century. During this period, the French ruled the French, and we can attribute most of the merit to her appearance, which is simply enchanting. Hundreds of years later, autochthonous plant species were replaced by palm trees, and a new big change comes before the end of the 20th century, when Riva is finally closed for traffic. The Statue of Gregory of Nin. One statue is located in Varaždin, Nin and Split, where the most famous one is in Split. The statue of Split was set on 29 September 1929 at Peristil. Split got its version of Gregory of Nin despite the great disapproval of a part of Splinic. Among them was the famous conserver and archaeologist Fr Frane Bulic. However, in 1954 the monument was moved to today's location - between the Golden Gate and the Dardan. Split Surroundings - what to visit

Dalmatian ethno village Šibenik is a unique attraction of Croatian tourist offer. This decorated space, with all its backyard facilities, is at the heart of the Solaris Beach Resource, which we have already written about. Its stone paved courtyards and stone houses reveal a whole new world. In fact, they reveal the world of past times, today almost forgotten. This is an opportunity to remind yourself of some things from the time since the beginning of a hundred years.

The door to Dalmatian ethno village is open to everyone. Particular attention will be given to people who love and respect the quality of the offer, while at the same time value deeply rooted Dalmatian tradition.

Sibenik Cathedral This building is interesting and striking, both in Croatia and in the world. Many dive into this facility, looking at it with the eyes of experts or a visitor who loves history and old building. The Cathedral in Sibenik is certainly the most important architectural achievement from the 15th to the 16th century on the Croatian soil. It is special for many things, and today it is a symbol of this city.

Krka National Park, famous for its magnificent waterfalls, is located near Skradin in the Šibenik-Knin County. The second most visited national park in Croatia offers tourists numerous values, from highly preserved nature and beautiful landscapes to cultural sights and active holidays. If you are a nature lover or want to explore the culture of the local population, NP Krka is an ideal destination for you. One of the most important things people often forget to mention is the beautiful Skradin town with which almost every trip to NP Krka begins. With less than 500 inhabitants, Skradin offers a history and cultural heritage that could attract many bigger cities.


The National Park Mljet was proclaimed on November 11, 1960, and its surface covers the northwestern part of the island of Mljet and the surrounding part of the sea.

NP Mljet represents the first institutionalized attempt to protect the original ecosystem in the Adriatic.

Park with its surface covers the western third of the island of Mljet. The boundaries of the park come from the area of Black Rock to the deepest point of the island, Cape Goli. There are some settlements in the national park: Polače (the main tourist and tourist port), Goveđari (the oldest settlement in Jezera), Soline (a small place at the entrance to Veliko jezero) and Pristina (post office and national park) Pomena (the only hotel on the island).


Kornati National Park was proclaimed in 1980 when it was protected. The total surface of this park is about 220 square kilometers and is made up of larger and smaller islands, and rocks emerging from the blue sea of ​​the Adriatic Sea. Of the total area of ​​Kornati, only ¼ of the mainland is occupied. The rest of the National Park is the sea and the living world that lives there.

Although at first sight Kornati is a desert and very isolated place, this park abounds in natural and cultural riches. Also, the animal and plant world are still a specialty of the park. It has natural and cultural features. Particularly distinguished are the vertical cliffs, facing the open sea, the so-called crown. They are a kind of phenomenon of Kornati, and habitat are rare species of plants and animals. Beauties are most distinguished by the natural diversity and the mighty silhouette of this island. The cultural heritage will only add to the beauty of the Kornati, and give one special offer for those who want to visit the National Park.

Beach Bačvice Split. If he heard about Split, he also heard about Bacvice. Worth and vice versa. Bačvice is the main town beach, and the most famous beach in Split. If you used to be at Bacvice, you've heard or maybe even played picigin. In addition to being a popular tourist gathering spot, local people are often visited by local guys, so girls play the most popular game in Split - after football, of course. Baffles, due to special shallows, are suitable for this game, and by that they have become planetary popular. Even out of the season, in shallow water almost every day you can see the lovers of picigin, how they leap, catching a small ball.


Beach Kašjuni Split. The Marjan Forest has another beautiful beach in Split. The Kašjuni Beach is located in the bay of the same name, on the southern part of the Marjan coast. It's very popular, and of course filled. You can reach the beach by car, park it nearby and continue on pure white pebbles. One part is constantly in the sun, with arranged loungers while the other end is hidden in the green pine forest. The beach is fully equipped and is suitable for all types of guests.

The most beautiful beaches in the surroundings of Split

Zlatni rat Beach Bol Brač. This beach is certainly the most famous on the whole island, and one of the best known in Croatia. The Zlatni Rat beach is special for its figure, especially if it is viewed from the air. It is a trademark of Croatian tourism and is the main detail of many brochures or greeting cards. It's popular, of course, and very well equipped. The beach has everything it needs to have. There are changing cabins, showers, and escorts for emergency rescue workers who take care of the safety of the swimmer.

Stiniva Vis Beach Vis Island is perhaps the most impressive beach in Stiniva Bay. It is very popular, especially because of its appearance and rocks surrounding this beach. It is little to say that the rocks are inaccessible. When you look at the photos you will understand what we mean. Still, there are people on the Stiniva beach who enjoy climbing on these high and steep cliffs. Adrenaline is a sport for the few who are well trained and courageous to do something like that.

Lučišća bay beach Hvar is a beautiful cove located about two kilometers north of Sveta Nedjelja on the island of Hvar. The beach is very small and can not be received by a large number of people, but fortunately it is very difficult to reach, mostly not being flooded. It is necessary to walk to the beach from Sveti Nedjelje.

Beach Mala Luka Omiš. If you go out of Omis, according to Stanic, you will find this beautiful beach called Mala Luka. It is hidden in natural greenery and beautifully decorated with stone walls. Little Port is a beach to spend a day on it. It has a natural shade, a beautiful and clear sea and a backdrop of large boulders. Take with you everything you need, because when you come to this beach it is difficult to leave while there is sun. Although there is shade on the beach, be sure to protect it with sunscreen The town beach Primosten is located in the seaside bay, it is very spacious and well decorated. On the beach in Primošten you have showers, changing cabins and, during the season, a rescuer who is carefully monitored for the safety of the guests. Gravel is this beach, long enough to receive all the guests, and again to have places for new ones. Beside the beach there are private accommodation, hotels and shops. All you need is nearby. Close to the beach is Velika Rudača.

Trogir Cathedral is one of the most famous Trogir monuments and is listed on UNESCO's list of protected world heritage sites. On this building are visible styles from romanes to baroque, and in it are valuable works of art. Of course, we think of the cathedral of St. Lawrence. 
There are numerous sights in the preserved historical center of Trogir, one of which is certainly the Kamenlergo tower. The tower was built in the 15th century and its construction is credited with Marin Radoj. It was once a military fortress, and today it was redecorated into the stage for summer concerts and performances. From the top is a breathtaking view of the romantic atmosphere of the past. He was glad to be visited and everyone liked to come to see the old walls of the tower. Omiš Situated at the mouth of the river Cetina, only 21 kilometers south of Split, which is 25 kilometers away. Omiš is a city with a special, very favorable position, which has enabled him to defend himself from attack during the history of the city, and today he offers a lot for tourism and the development of the city in general. 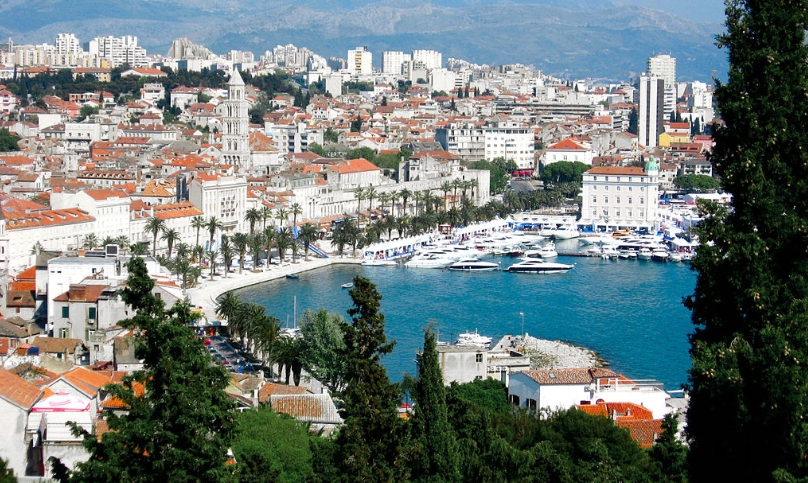