If you were when in Split, especially during the summer months, then you are very likely to have been on the Bačvice beach. We will present you the most famous beach in Split. Bačvice is actually a residential district and a city district of the Croatian town of Split. The quay surrounds the bay where this beach is located. It is a beautiful sandy beach, located in the very center of the city, which is very popular and well-known outside of Split.

The beach is located not far from the city harbor to the east and is famous for its sandy perch, which goes far into the sea. Due to its basics and shadows we mentioned, Bačvice beach is ideal for playing picigines.

The very part of the city near the beach is rich in historical and cultural monuments, among which the church of Our Lady of Pojišana from the 10th century is especially distinguished. The church was built above the bay, in the Pojišan area. Bačvice bay is 600 m long and the sand section is 180 meters, while the rest of the bay is a concrete promenade. The beach at Bačvice has become a cult place for playing picigines, and there are tournaments every year. Since 2005, the World Picnic Championship has been held on the beach.

Bačvice Beach is a ten minute walk from the center of town. It is located in a shallow sandy bay and is popular in the shallow waters to play the traditional "picigin" game. This game is a favorite among the Spaniards, who for 90 years have perfected their skills in the seafront. They play it all year round, even in the coldest winter months. The Spaniards take this sport seriously, and the best thing to do with this is the fact that there are spotlights for the night game on the beach. The interesting thing about this competition is that picigin does not play points, so in the competition there are no winners. Namely, the goal of the game is to make the most attractive jumps and in the best way to reject the ball with the palm. If you visit the beach, while playing picigin, be sure to stop and see little about what the game is about. Apart from enjoying the picigin, here is a great number of bathers, and besides bathing you can enjoy in the nearby terraces of local cafes and restaurants. Most of the beach is a concrete platoon designed for walking and sunbathing, and you can enjoy it on or near the beach by lounging on sun loungers under the sun.

There is also a popular nightclub on the beach that is popular with younger Spaniards. The club is also popular among the guests, so this beach is another good place to go to nightlife. If you are young, look for fun and music until early morning - come to Bačvice.

The beach has a blue flag and the sea is very clean but still a big problem is seaweed that waves often drift off the coast, as well as sea turbidity due to fine sand.

For safety on the beach and in the sea, experienced life savers are so that you can relax and enjoy the sun and children can have fun in the fun park with water slides, trampolines and rubber castles. Of the extra content needed on one of these beaches, we can include outdoor showers, public wc, changing cabins, and there is also possibility of renting sun loungers and sunshades.

A couple of interesting facts about this beach

Many do not know, but on Bačvice beach, they have recorded a legendary video spot for Pipi's sparkling advertising. It was already far 1983. Spot was filmed under the patronage of Dalmatia, and former Miss Yugoslavia, Ana Sasso, appeared in it. In 2013, the group Studio Frendo launched the song "Pipi", whose content revolves around the episode on Bačvice.

Another interesting thing - Splitska group Stivideni recorded the song "We Go to Bačvice" dedicated to this beach. 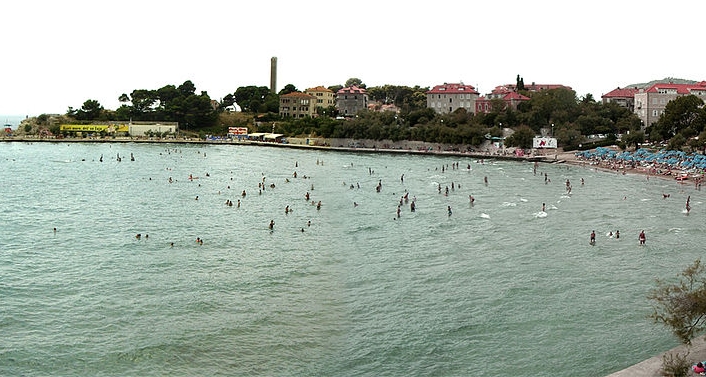