Comment or Upgrade this article, write a new one. Registration is not required
article
Position
Ticket prices

The Spaniards are very proud of their stadium - Poljud, who visits an increasing number of foreign visitors year after year, to see and dive into the stadium. Poljud Municipal Stadium, well known as Poljudska ljepota. It is located in Split's Poljud district in the northwest of the city, at the place where it was once a medicinal mud. The stadium was built in 1979 as part of the sports facilities of the 8th Mediterranean Games.

The author of the project is the distinguished Rijeka architect Boris Magas. The stadium itself emerged from the stadium construction stage, and has greatly influenced the architectural views of many world stadiums in Italy, Japan (Kobe) and Malaysia. After the Minheni Olympic Stadium, it attracted the most attention of the public in the field of athletic architecture.


Poljud enters the seating and layout of the forums

HNK Hajduk Split plays at home. The stadium capacity is 35,000 seats. Apart from the maintenance of the Mediterranean Games, for which the official stadium was opened by Josip Broz Tito, in 1990, Poljud was held the European Athletics Championship where European and world records fell. France's 4x100m rake dropped the world record with a score of 37.79. Allocated 165 medals, 125 flags were aired, and 43 anthems were played. There were even 1,200 reporters from around the world present. The lights of athletic athletics were directed towards Poljud. In addition to the aforementioned events and achievements, a decade earlier in the 1980s at the International Athletic Rally, numerous athletes such as Acherman, Simeoni, Byer, Mennea performed, while Ruth Fuchs threw a spear to a new world record of 69.96 m.

Poljud is one of the stadiums where its home game is played and the Croatian football team. It has hosted some of the world's strongest teams, so we can distinguish Brazil, Germany, Italy, the Netherlands and others.

In addition to sports, the stadium also hosts musical events. Among the concerts held at Poljud were especially remembered the performances of Miško Kovač, Thompson, Vinko Coce and Friends, Iron Maiden, Roger Watwers and Ultra Festival.

Recently, HNK Hajduk has placed an organized tour of the stadium. With nine locations escorted along with guides, visitors will be able to familiarize themselves with the history of the club and the stadium in 40 minutes with just 20 kuna.

By visiting the stadium you will know many interesting facts. You can hear the story of the founding of Hajduk, as well as the White and Brown Salon, take a look at the pictures of Hajduk, Starom placa and Torcida's attractions and in the Trophy Hall to see the most valuable trophies and listen to the story of Titus Cup.

On the trail of the tour are also the solemn lodges, lawns and chapels that also offer their interesting stories.

During the month of June, the stadium can be visited every day from 9am to 7pm on a full day, and after mid-July for the start of the soccer season, it is necessary to announce the arrival time in advance.

The look of a tourist tour of the stadium Poljud

Due to the increasing number of tourists coming to the stadium, there are organized guided tours of the stadium and the club room with guided tours. The tour price is 35,00 kn (VAT included).

The group tour is best organized in advance, although in June it is possible to visit the stadium every day from 9am to 7pm.

Sightseeing takes between 30 and 40 minutes and includes:

A story about the founders of Hajduk, a short history, about the brook Flek and about the birth of Hajduk's name.

A short tour of the White and Brown Salon with a short story that each of them represents.

On the right side of the picture depicted about the interestingness of Hajduk, the Cup winners, the Old Plac, the Torcida, the legends of the club.

The Charter of Hussein's Proclamation of the Honorary Team of Free France, the most expensive cup from Spain in 1974, receiving at Father Pape, the Cup of Yugoslavia - the story of Titus Cup, the championship, the Cup of Croatia, the biggest defeat of Manchester outside England, the original libretto operetta,

Renovation of the legend of Hajduk, which has a reserved place in the lodge.

The story of the stadium guide, its construction and technical characteristics.

The hallway to the exit

Sightseeing of the country's champions through history with guide information about the best players of the generation, the best shooter and the curiosities about individual generations.

If you want here you can buy props that are thematically painted, or otherwise linked to the club and its successes.

What to write for the end except maybe - Hajduk lives forever! 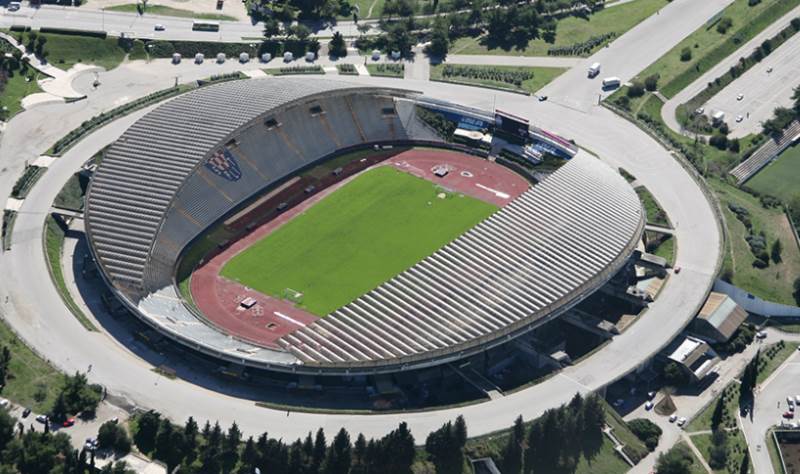