﻿ St. Duje in Split - What to Visit in Split Croatia

# St. Duje in Split - What to Visit in Split Croatia

One of the most important sights of Split is certainly the cathedral of St. Duje. They say this is the oldest cathedral in the world, so we'll try to describe it as well as possible. The Cathedral of Split is dedicated to the Assumption of the Blessed Virgin Mary. It is known as the Cathedral of St. Dujma and Sv. Duje. The Split Cathedral is located in the Diocletian's Palace complex, Peristyle, and was originally Imperial mausoleum. The first building was built at the beginning of the 4th century, and later renovated in the cathedral. It is believed that this cathedral is the oldest cathedral in the world.

The cathedral is not conceived at the very beginning. In the building of today's cathedral, which was built in the 4th century, the mausoleum of the Roman Emperor Diocletian was housed. On the eve of the Emperor's death, in the 63rd edict of Milan, Christians were given the freedom of confession of faith, so they were in Salona. Salona was at that time the administrative center of the province of Dalmatia, where a basilica was built over the graves of Christian martyrs, which became the seat of pilgrimage and the cult of saints. In the 7th century, Avars and Slavs crashed Salon. The surviving inhabitants fled to the islands, from which, after some time, some of them came to the mainland and settled in an abandoned Imperial palace. In time, they transformed the Imperial mausoleum into a Christian church, removed the pagan idols and the sarcophagus in which the car was resting. From the ruined basilicas in Salona, ​​the bones of the sacred martyrs that Diocletian allowed to execute were sent: Dujma, the first Bishop of Salona, ​​and Anastasia, the workers, who were deposited in the emperor's mausoleum dedicated to the metropolis church. Today we have written records - surrendering preserved in the Split Chronicle of Thomas Archdeacon from the 13th century, in which he wrote that the first Archbishop of Split was Ivan Ravenjanin in the 7th century. Ivan Ravenjanin organized and edited the Split Church.

Recognition of the cathedral in Split

We can recognize the Cathedral of Split by the wooden door that was made by the homemaker Andrija Buvina in 1214. He carved 28 scenes of Jesus' life in walnut wood. The doors are well preserved, except for the lower extremities that are damaged by the passers-by. Buvina is a gateway to rarities in European art heritage, especially because of the fact that the bronze Romanesque doors are much larger than the wooden ones of the same period.

It is assumed that the bell tower of the cathedral was built in the 13th century. That theory goes hand in hand with a couple of historical records, in particular the 1257th anniversary of the mention of Kolafis (Golubica), the widow of Split Prince Ivan Krcka, as a donor of a bell tower. The local tradition gave her her credit and raised the pulpit in the cathedral.

The oldest world cathedral is located in Split

When we write, or talk about Christianity in Croats, there is one at least a irony. Many do not know that, so let's explain. Namely, the fact that Split Cathedral and the oldest cathedral in the world are very interesting. It would not have been so strange that this cathedral is not within Diocletian's palace, therefore within the emperor's palace, who was once one of the most persecuting Christians.

The Split Cathedral was built in the fourth century as the mausoleum of the Roman Emperor Diocletian. The Cathedral of St Duje is known for its wooden door, which was made by the homemate of Andrija Buvina in 1214. In the wreath of twenty-four stories of the life of Jesus, The doors are very well preserved, except for the lower part that has in time been damaged by passers-by passing through the door. The doorbells are rarities in the European art heritage, as the rare doors are made of wood and have been preserved to date. The cathedral is also recognizable by its tall and beautiful bell tower, a combination of Romanesque and Gothic architecture, whose construction started in the 13th century. Particularly interesting are two medallions with ribbons, where archeologists and Split tradition recognize portraits of Emperor Diocletian and his wife Priscilla. Interestingly, the construction of the dome is masonry by the brick arrangement of the bricks in the lower and circular arrangement in the upper third. The dome shone with a glittering mosaic as well as the one in Vestibulu.

To the left of the entrance to the cathedral is a sixteenth-century pulpit from the 13th century. It was built of a precious green porphyry, once entirely gilded. The right side altar was dedicated to the Salonic bishop and martyr St. Sveti.

Especially a beautiful central relief on the sarcophagus with the representation of the Blessing of Christ. This artist's work, the sculptor Dalmatinac, shows Christ made more and more comfortable. The main altar was erected sometime between 1685 and 1689. In the north niche there is an altar made by the Venetian sculptor Morlaiter in 1767, in which since 1770 lies the power of St. Duje from Bonin's altar. The most important work in the Baroque burial of the cathedral was the wooden bench bases that originally stood in front of the main altar, carved even in the first half of the 13th century.

Interesting facts about the Split cathedral

Below the mausoleum in the cathedral is a crypt dedicated to St. Lucia, the virgin and the Christian martyr. In the cathedral treasury today is kept the Evangelist St. Dujma from the second half of the sixth century. This is the oldest manuscript written on parchments preserved on the soil of Croatia. Visitors to the cathedral can look at the historical details dating back to the time of Emperor Diocletian's rule.

Among treasury values ​​are precious archive documents, medieval codes (Historia Salonitana), numerous relics, silver altar altar. Dujma from the first half of the 14th century. There is also a thoughtful carpet, pottery and miraculous icon of Our Lady of the bell tower taken from the church above the Iron Gate.

In addition to the entire richness of historical records, cultural heritage and the preservation of the Split Cathedral, an article published on the CNN portal is sure to be published, including in the article "20 Most Beautiful Places of Croatia" Duje. A large number of tourists visit this famous church every year, admiring the artwork and historic buildings surrounding the cathedral itself. 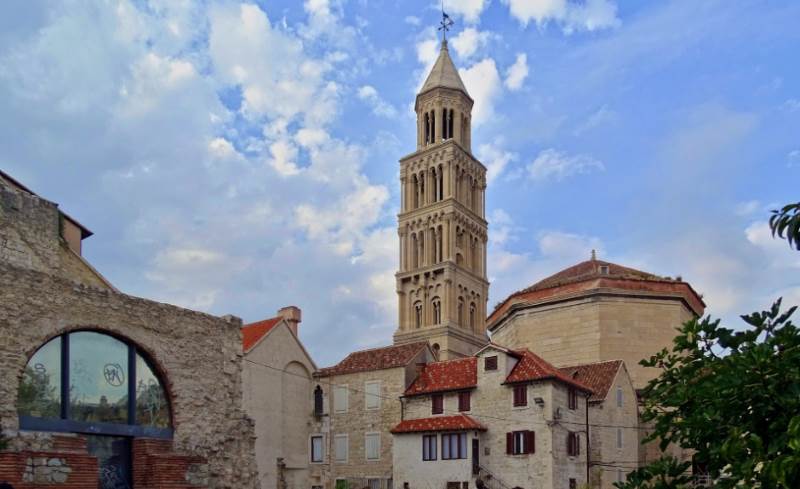