Interestingly, it is the oldest museum in Croatia. Yes, so - The Archaeological Museum in Split is the oldest museum in Croatia. It was founded in 1820 by the decree of the Dalmatian government in Zadar. The first director was physician and archeologist Frano Lanza. Just like other institutions of this purpose, the original building of the Archaeological Museum stood beside the walls of the far-known Diocletian's Palace. Today, the museum is proud to preserve about 150,000 archeological monuments and artifacts. Here we include a good number presented through a permanent posting. The Archaeological Museum in Split possesses a valuable collection of archaeological objects from prehistory, from the time of Greek colonization of the Adriatic, Roman and early Christian and early Middle Ages. It is certainly a worthwhile place to visit. The Spaniards enjoy and are paying close attention to their history, but every year, this institution visits a large number of guests from outside. Apart from serving the preservation of the historical truth, presenting the development of the city, this museum has in some ways become a tourist attraction. Many guests, who visit Split, are very interested in the Museum. They study exhibits and learn about Split's history.

The work of the museum today

The museum constantly conducts systematic archaeological research at Saloni and Issi localities and has a handy collection and location of Salona as well as a handy collection of Issa in the building of Our Lady Batarija and the locality of the same name in the city of Vis.

History of the museum and development to date

We know that great interest in Croatian monumental heritage has existed since ancient times. Rich historical events in these areas have left many traces that we are still carefully studying today and are exploring every day. The museum started its story at the very beginning of the 16th century, when the Split humanist and nobleman Dominik Papalić gathered in his home a collection of antique inscriptions. There is a collection, along with Mark Marulic, "the father of Croatian literature", found for many walks through the ruins of Salona. In the atrium of the exhibition hall of the Archaeological Museum, five original inscriptions were exhibited - how much they were preserved from that collection. The next important date associated with the development of museum activity was the founding of the Archbishopric Museum in Split in 1750. This museum kept a large collection of Latin inscriptions predominantly from the ancient Salona.

The Archaeological Museum in Split was founded in 1820 by the decree of Dalmatian government in Zadar. The inspiration for its foundation was the arrival of Emperor Francis I to Dalmatia in 1818, when he visited Split and the solemn monuments. The first building of the museum was erected in 1821 and it was located near the eastern walls of Diocletian's Palace, but soon became overwhelmed by the increasing number of monuments. The museum later moved to the building that still stands today.

Don Frane Bulic is credited with a new era in the development of Croatian archeology. He has been the museum director since 1884 and greatly contributed to the importance of this institution.

Don Frane Bulic, (Vranjic, 1846 - Zagreb, 1934) is a Catholic priest, archaeologist, historian and conservator. He has been working for more than 50 years as a field researcher, conservator and writer. Founder of the Croatian archaeological society "Bihać", founded in Split in 1894

We can say that he is largely responsible for building the current building of the Archaeological Museum in Split, which was erected in 1914 according to the plans of Viennese architects A. Kirstein and F. Ohmana. The same architects have designed in Carnuntum near Vienna a similar building also for museum purposes.

The architectural complex consists of a main building with a ground floor exhibition hall and a library and workroom on the floor, a covered lapidarium and a landscaped garden. The relocation has unfortunately delayed the war, so the new museum building opened its doors to the public only in early 1922, The museum is carrying out regular archaeological research on Salona and Issa. By 2004, research was carried out at the locality of Narona (Vid near Metković).

The museum has a Tusculum regional building at Monastery in Solin and the archaeological collection of Issa in the building of Our Lady of the Batavia in Vis.

Significant is the collection of stone inscriptions from Salona (about 6,000 copies), a collection of Greek Hellenic ceramics, Roman glass, ancient clay lamps (about 1600), bone, metal objects and a collection of gems (the largest in the country).

The museum holds a large collection of antique and medieval money (over 70,000 pieces) and has a significant library and archive fund. The new permanent exhibition in the renovated Museum was opened on December 18, 2000.

Today, everyone can enjoy exhibits, study and learn history. 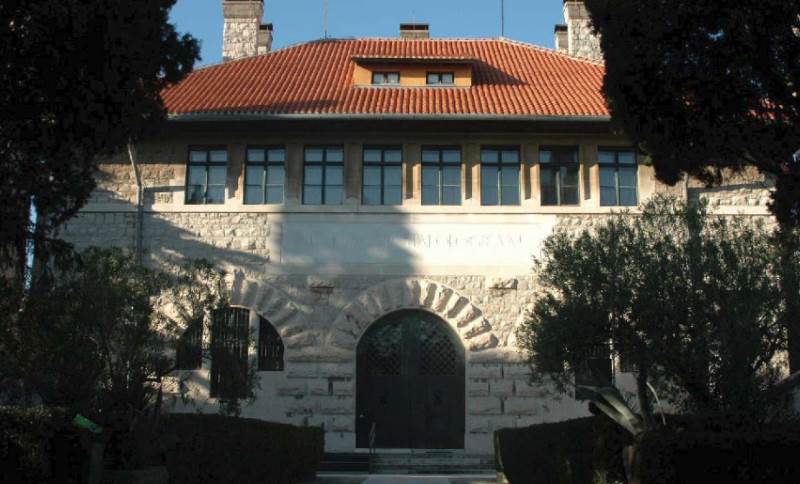