It is no secret that Dubrovnik is a pearl and the most beautiful city in the republic of Croatia, best known for its walls and numerous historical churches and fortresses, which is why more than a million tourists visit it every year. For example in 2018 Dubrovnik has visited more than 1.2 million guests. The most famous activities in Dubrovnik are walking on the walls, exploring the old town, visiting the cable car on Mount Srđ, nearby Lokrum island and the monastery on it, the Game of Thrones tour, visiting Dubrovnik's famous beaches such as Sveti Jakov, Banje, Copacabana and other activities. Not only Dubrovnik is beautiful, its surroundings have its own adut, and a place worth visiting if you are in the vicinity of Dubrovnik is the National Park Mljet.

NP Mljet is the first institutionalized attempt to protect the original ecosystem in the Adriatic.

Park with its surface covers the western third of the island of Mljet. The boundaries of the park come from the Blackbird area to the deepest point of the island, Cape Goli. Some national parks include Polače (the main tourist and tourist port), Goveđari (the oldest village on the Jezera), Soline (a small place at the entrance to Veliko jezero) and Pristina (post office and national park) and Pomena (the only hotel on the island). The lake is actually a bay that is connected to the open sea by Solin. It was caused by the scorching of the karst field. The large lake has an area of ​​almost one kilometer and a half (1.45) square kilometers, its largest being 2.5 kilometers long and 1 kilometer wide. The lake is quite deep, with the deepest point of 46 meters. As we have already mentioned, the Great Lake connects with open sea to a long and wide canal. At the place where the lake connects with the sea, there is the Great Bridge, and from this place it extends to Solinski channel, from where it is further connected with the open sea. Near the bridge you can see the old Benedictine mill, which was powered by electricity, and served for the production of salt - which is why Soline was named. It is interesting to note that the Great Bridge was deliberately demolished in 1958 - so the president of SFRY Josip Broz Tito could enter the lake with his yacht.

Apart from the Great Lakes, there is a small lake on the island, in the northwestern part of a large lake. Two lakes are connected by a 30 meter long channel, which is deep up to half a meter. The canal is located in a place called the Little Bridge. The lake's surface area is 0.25 square kilometers and its maximum depth is 29 meters. The sea is slightly changed in the Small Lake and it has the lagoon. The next nearest national park Dubrovnik from Croatia is NP Krka, which will settle you and not so close, is about 250 kilometers north. Pictures and videos of this beautiful park near the Skradin town may still give you a bit further.

The Krka National Park, famous for its magnificent waterfalls, is located near Skradin on the Šibenik-Knin County. The second most visited national park in Croatia offers tourists numerous values, ranging from extremely preserved nature and beautiful landscapes to cultural sights and active holidays. If you are a nature lover or want to explore the culture of the local population, NP Krka is an ideal destination for you. The longest waterfalls of the river Krka called Skradinski buk are probably the main reason for your visit to this national park. With over 17 steps and a total height difference of 45 m, Skradinski buk justifies its title of the most beautiful natural beauty in Croatia. At the foot of the Skradinski buk, it is possible to swim, so you can cool down after a long sightseeing of Krka, which has many things that you can not miss. One of these things is an ethno village where you can see 19th century stone watermills and numerous objects that the local population used in the past.

Although not a National Park, the Biokovo Nature Park is definitely worth visiting if you are a nature lovers. The distance from Dubrovnik is some 150 kilometers to the north, which is far less than the NP Krka and offers a completely different kind of recreation, especially if you are a hiker and athlete in nature. It is worth mentioning that the park (Biokovo) was declared in 1981 with the total area of almost 200 square kilometers. The highest peak in the park (this mountain massif) is Sveti Jure, with an altitude of 1762 meters. The peak of St. Jura is also the highest peak of Biokovo mountain, and is the third highest peak in Croatia.

Biokovo Nature Park visits some 50,000 tourists a year. The park is especially interesting to nature lovers, adventurers, and of course researchers, biologists and other interest groups dealing with similar types of research. Biokovo is a natural environment in which we witness the evolution and appearance of plant and animal species that we can not meet anywhere else.

The mountain itself is right next to the sea, and actually is a natural barrier to the Adriatic climate, and continental climate change. The main feature of the mountain is its imposing height and steep rise from the shore. At the end of the mountain or foot, with a height of about 300 meters, there is a slight decline towards the sea, and in this part have developed many places, which are today significant for the whole summer tourism in Croatia. 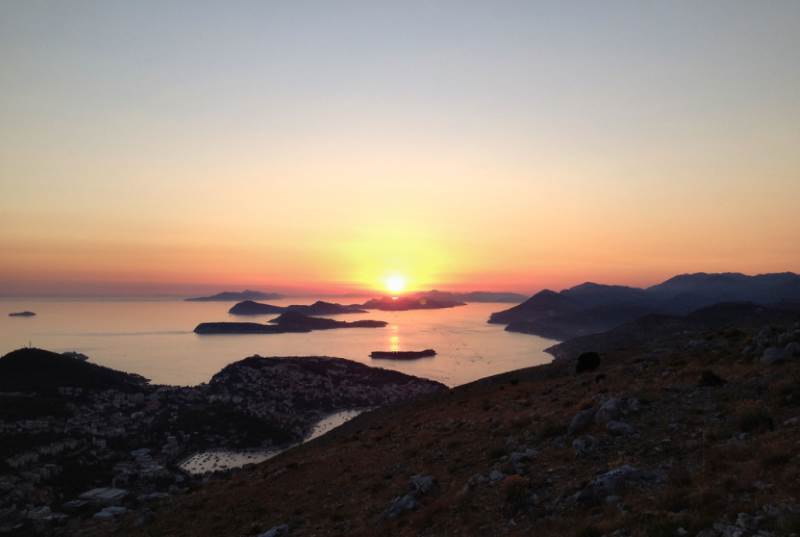 Mount Srđ above Dubrovnik - A car on foot...