﻿ What to see around the Dubrovnik area

# What to see around the Dubrovnik area

Dubrovnik is a town on the UNESCO World Heritage list since 1979 and is the most famous Croatian city of tourism. For years, the city of Dubrovnik has attracted the attention of the whole world. It has become one of the most desirable cities to visit, which is not surprising with regard to beauty, rich history and generally its status over the past time it had. We bring you a list of the most famous sights and locations you need to visit if you are in Dubrovnik or in the surrounding towns and cities in the region of South Dalmatia and suggestions of what to do in Dubrovnik.

Attractions and things to do in Dubrovnik Croatia

If we talk about the natural beauty of Dubrovnik, in this case it is worth mentioning also the hill Srđ. It is located on the north side, and the highest peak is 415 meters above sea level, with its entire Dubrovnik seen as a palm, is the place where you can make the most beautiful pictures of vacation in Dubrvnik. The hill was named after the earliest patron of Dubrovnik, Srđ. Sveti Srđ was the patron of the city even before St. Augustine. Vlach which the people of Dubrovnik today celebrate. Dubrovnik Walls - If we are writing about Dubrovnik's sights then we should certainly mention the city walls with numerous fortresses. Every panoramic photo will capture this interesting detail - City walls, with many towers and fortresses built to protect the Republic of Dubrovnik from the enemy. Dubrovnik City Walls are the biggest attraction for visitors. It is one of the best preserved fortification systems in Europe, 1940 meters long, including five fortresses, and sixteen towers and bastions. The second most attractive open-air museum in the world is open to tourists visiting throughout the year. Stradun - Walking through Dubrovnik is something special, of course we mean Stari Grad and walking Stradun. Stradun or Placa Street in Dubrovnik is the main street in the old town center. The most famous is the Dubrovnik street in general, very busy and always beautifully filled. The name "Stradun" comes from the Venetian and is a ferocious name for a big street, and the name "Placa" comes from the Latin word "plateau", meaning "street". Church of St. Vlaho Dubrovnik - This church was built in baroque style, on the site of the former Romanesque church. The church of St. Blaise, patron of the city of Dubrovnik, was built on the site of an older Romanesque church, which survived a great earthquake in 1667 but burnt down in 1706. The church was damaged in the earthquake of 1979 and also in the Homeland War (1991-1992) when it was damaged by numerous missiles, the strongest on the roof and the northern facade.

The Cathedral of the Assumption of Mary Dubrovnik - The Cathedral of the Assumption of Mary (Dubrovnik Cathedral) is dedicated to the Assumption of the Blessed Virgin Mary on the Sky (Great Lady). The headquarters of the Dubrovnik Diocese. The cathedral was built on the site of Byzantine and Romanesque cathedrals, which was destroyed in a great earthquake in 1667. The present Baroque cathedral was built in the period from 1671 to 1713. According to one legend, the Romanesque cathedral from the 12th century was built with the money of the English King of Rikard I. Lavljeg Srca, which was far from Lokrum survived by shipwreck. This happened because of his return from the Third Crusade in 1192.

Church of St. Ignatius is the Jesuit Church in Dubrovnik. The church stands out among the many beautiful sacral buildings of the Dubrovnik republic. It was built as a Baroque single-nave church with a representative facade, modeled on St. Ignatius church in Rome. The project was designed by architect Andrea Pozzo, and the church was completed in 1725. The lucrative baroque frescoes in the interior, with scenes from the life of St. Ignatius of Locholsky, were taken by the painter Gaetano Garcia. In 1885 an artificial cave was set up in the church, dedicated to Our Lady of Lourdes, one of the oldest in Europe.

Beaches in Dubrovnik and its surroundings

Sveti Jakov Beach Dubrovnik - If you go along the coast to Dubrovnik, from the south to the north, you will go to Sveti Jakov beach before entering the city. It is hidden beneath the cliffs, with pines covered in rocks, but it can easily be reached by small stairs on one side. The beach is made of small gravel, giving you an impressive view of Dubrovnik and many boats coming and going. This beach is popular and you do not have to be surprised by the sunshade and a large number of sun loungers on the beach. Next to the beach there is a beautifully decorated, stone-framed restaurant with a terrace and a sea view. The beach is romantic, very suitable for couples.

Banje beach is the most popular beach in Dubrovnik. It is located in the immediate vicinity of the Old Town in the east direction, between two luxurious Dubrovnik hotels. The beach is pebble and well equipped. Just as well as the main beach in the world's popular city, the Banje beach is equipped with all the amenities that guests may need. The sunscreen in our photos demonstrates how popular the beach is.

The attractive Dubrovnik Bellevue Beach is located in a beautiful bay at the foot of the hotel. On the beach it is possible to arrive either by lift from the hotel or bypass, by foot. The beach is made of small gravel, surrounded by high rocks on sides that are so high that in the afternoon they shave on the beach.

Copacabana Beach Dubrovnik is the name of one of the most popular beaches in Dubrovnik. In recent years it has become even more popular, especially because of its rich content for guests, which is largely unique and specially designed for the guests of this beach.

Dubrovnik Surroundings - what to visit

The National Park Mljet was proclaimed on November 11, 1960, and its surface covers the northwestern part of the island of Mljet and the surrounding part of the sea. The island of Mljet is often referred to as the green island, which actually tells about its rich and varied plant life. The vegetation of the national park Mljet is lush and varied, and it consists mostly of Aleppo pine forests and various low plants and plants covering the island's surface.

Beaches in the vicinity of Dubrovnik

A bit unusual name for a beach in Croatia, yet - Bubbly Beach Cavtat has its guests and admires them year after year. It is poorly visited from the mainland, it is difficult to reach it and there are no settlements nearby. That's why it's a favorite destination for boaters. Many here find their peace and sanctuary during the hot summer days. From the Bubbly Beach you can see anchored yachts, and guests who enjoy the privacy offered by the beach.

Štikovica Beach Zaton Dubrovnik is one of the most popular, beautifully decorated and well-equipped. It is made of thicker pebbles, very clean with a quiet sea front. There is no shade on the beach, but this is not a problem as you can rent sunshades. The beach is dominated by deck chairs of numerous guests, and various sunshade colors. The sea is at the beginning shallow and is perfect for children's play. Immediately on the beach you have a well-equipped restaurant, which means that you offer high-level meals and drinks. If you come to our beach we are convinced that you will not be disappointed. The beach offer is top-notch as well as the service.

Vučine Pelješac Beach - Beside the place Žuljana, on the peninsula Pelješac lies a large beach under the pine woods - Vučine Beach. The beach is isolated, made of gravel and hidden in the natural shade of tall pine trees. It is great for anyone who loves to spend the rest in peace, out of the great crowds and noise. The sea is quiet, pleasantly warm and accessible to the whole length of the beach.

Proizd island - is a small isle of less than one square kilometer in the north-west of Korcula, 4 miles away from Korcula. On the island there is only one restaurant on the south side and several beautiful bays with crystal clear sea. One of the coves, Donji Bili Bok, is for naturists and has a FKK mark.

The Pasjača Popovići Beach, or the Old Rocks of Pasjača, is a place seemingly unattractive but can still come and enjoy it. Whoever loves a natural environment, a little privacy and less crowds, let it come to our beach and enjoy your vacation. The beach is very isolated, but it still has a small pedestrian path. It is interesting that one part of the way enters the rocks, through the tunnel, to finish again on the steep cliffs surrounding the beach.

Back Ston - The beautiful sandy Prapratno bay is located 3 miles west of Ston. It is then one of the most beautiful bays on the peninsula of Pelješac with a sandy beach surrounded by pine forests and turquoise waters. 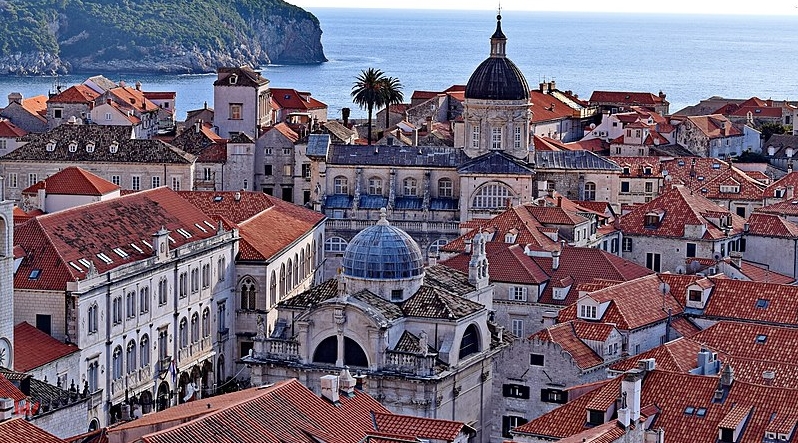