﻿ What to see around the Rovinj Istria area

# What to see around the Rovinj Istria area

We bring you a list of the most famous sights and locations you need to visit if you are in Rovinj or around Rovinj and Istria. The city is located on the beautiful Istrian coast, just below the Lim Channel. They say that Rovinj is the best city for romance - at least in this part of Our Beautiful. The city of Rovinj is the right destination for romantics and people who feel sentimental in some past times. Today, the city is developed and is one of the leading tourist destinations on the Adriatic. In Rovinj we can add up to 30,000 beds, of which one quarter occupy private accommodation facilities.

Attractions and things to do in Rovinj Croatia


The Rovinj Aquarium is located in a centuries-old building located within the Maritime Research Center of the Ruđer Bošković Institute, where you can experience all the diversity of the Adriatic underwater world. It was opened in 1891 as the Berlin Aquarium Zoo and is one of the oldest institutions of this kind in the world. The aquarium is open to visitors and abounds in patterns of local flora and fauna that represent typical communities living in our underwater world. The Aquarium is an interesting and beautiful collection of different types of fish, crabs, shells that inhabit the Adriatic.

The Rovinj Town Museum is located on the Marshal Tito Square 11, in the baroque palace of the Counts of the Califfs of the 17th century. It is open every day from 10 to 22 o'clock. The Museum was founded in 1954 at the initiative of Rovinj artists and divided into several departments. The Department of Archeology consists of the archaeological and numismatic collection, the Ethnographic Department, the Department of History, Fine Arts and the Library. Various exhibitions and activities are also organized in the museum area, which are announced on the museum-rovinj.hr museum website.

The Forest Park Zlatni rt is the largest Rovinj natural attraction, an ideal place for various sports activities and enjoying the natural environment and beaches. The park is also the largest gathering of swimmers in the summer in Rovinj, due to its indented coast that abounds in pebble bays largely oaked by rocks. Not far from Zlatni rt park there is the beach Cuvi Rovinj.

Cisterna Beach Rovinj. In the coastal area of Rovinj, this beautiful beach of Cisterna has also been found. It is made of medium-sized cobblestones, is isolated and located in a natural environment. However, on the beach you have a coffee shop that will come as a refreshing after sunbathing. The sea is calm and pleasant warm, and access to water is gentle. It is a perfect beach for a family outing or for young couples who want to enjoy the peace and not so much crowds. The Red Island consists of two connected islets, Sveti Andrija and Maškin, and is one of the most popular tourist destinations for guests staying in Rovinj and its surroundings. Mulini is a beach in the attractive area of Rovinj, which ends in the green area of the Golden Rt. The beach, from the center of the city, to the green areas, extends a beautifully landscaped walkway. Beach is one of the most popular in the city, and certainly among the nicest.

Amarin Beach Rovinj. In the very touch with the sea the Amarin beach is sandy, with mild weather and suitable for all people. A little above can be found pebbly ground, and concrete tiles on the sides. The beach has showers and changing cabins. It is located in a populated place and is very much visited. Behind the beach there is a small stone wall, behind which there is a pebble creek, suitable for sunbathing and daytime snooping.

Rovinj Surroundings - what to visit

The Brijuni National Park, although known as the residence of Marshal Josip Broz Tito, the president of former Yugoslavia, has far more to offer to its visitors. Only 3 km from the Istrian coast, Brijuni is an oasis of plant and animal life, consisting of about 700 species of plants and about 250 species of birds. Along with the specific fauna that has been created by cutting the forests and transforming them into a spacious meadows, there is also a flora that has had a major influence on the human factor that the animal world has enriched with many imported species that were originally not in this habitat. It can be said that the Brijuni represent harmony of nature and man's influence on it.

The Arena in Pula is the largest monument of antique construction in Croatia, the sixth largest amphitheater in the world and one of the best preserved species in the world. Built in the first century, it is presumed to be sought by Emperor Augusta and the construction of the Vespasian Vespazijan was resumed, which is due to build the Roman Colosseum.

The Pula Museum of Contemporary Art was founded in 2008, when it was registered at the initiative of the Istrian County. The museum still has its own museum building, but has been used for the Galery purpose-adapted space of Pula's Old Print, St. John 1, in Pula, which was handed over to the Museum of the City of Pula for use for 10 years by the Agreement on the Use of Old Printing on 01 June 2011. Aquapark Aquacolors near Poreč, a total investment of 25 million euros is open for the season of 2015. Aquacolors is the largest water park in Croatia, offering 500 meters long river, 3 swimming pools and 4 playgrounds, 12 water slides, 5 restaurants and daily animation content. The water park is intended for all ages, so there are attractions for children and those with a little more adrenaline for adults. Aquapark Istralandia is a fun water park nearby which is about 5 kilometers from Novigrad towards the interior of Istria. The park is open in 2014 and is the first water park in Istria, located on an area of 80,000 sqm and offers many attractions for children and adults. Aquacolors vs Istranadia price comparison and content.

Euphrasius Basilica in Poreč began with construction in 553 and is one of the oldest and most beautiful preserved monuments of early Byzantine art in the Mediterranean. Today it is considered the most beautiful preserved monument of early-art art in the Mediterranean. The basilica was built in the 6th century at the time of the Bishop Euphrasia and Emperor Justinian I. The importance of this basilica is enough to be said by the fact that in 1997 the Euphrasian Basilica in Poreč was included in the UNESCO World Cultural Heritage List. Beaches in Rovinj and the surrounding area of Rovinj

Amber Beach is one of the most popular beaches in Pula, located in the tourist area of Verudela, on the western side of the peninsula and continues on the Brioni beach. Nearby is the popular Puljska beach Hajvajka. From the center of Pula is about 4 kilometers away. The beach has a blue flag for the purity of the sea, the neatness of the beach and the offer. Because of the gentle entrances to the sea, Ambrel pebbles are very popular for families with children. On the beach you can rent sun umbrellas and sun loungers and enjoy various sports and adrenaline activities. If you are a little away from the central part of the pebble beach you can find shade in the nearby pine forest, in these parts is a rocky beach with smaller pebble beaches. Beach Grotte Von Pula The sheltered beach in Mužilj bay is a natural environment that many love and appreciate. Access to the beach comes from a forest, a small trail leading to the pebble beach. The beach is mostly rocky, with side but accessible and suitable for sunbathing. They want to come here adventurers, people who do not suffer big crowds and lovers in untouched nature. The sea is extremely clean, pleasantly warm and beautiful in color. Rocks underwater give a reflection that revives the shades of blue and green.

Sv. Ivan Pula is located on the same name Cape and is in contact with the sea from Sveti Ivan bay. It is very beautiful, clean and well-equipped. This beach is popular, which is not surprising given the location. All this part of Pula is well-visited, and so is the surrounding beaches. Beach St. Ivan is made up of tiny gravel that can still be found by straying slightly larger junctions. The sea is very clean and beautiful. It is comfortable for swimming, and access to the sea is easy and convenient for all people. In the vicinity of Rakalj there is the beach Luka. It is located in a cove, made of medium-sized cobblestones and bordered by rocks. The bay of Žbirac is nearby. This is an interesting detail, especially if you are working on vacation photos. The silhouette of tilted boats will be a great backdrop for good photos from the sea. Kamenjak Beach Premantura This beach fully describes its name - Kamenjak is just a stone beach, more accurately rocky rocks. You can reach the beach by a car, which you leave on the elevation and continue to the beach on foot. When you descend to the sea, you will be greeted by large stone surfaces, and of course the sea that touches them.


The Kanica Beach Peruški is located between Peruški and Krnica. Some who can boast of such a beautiful beach. If you look at the photos you can see the beautiful beach surrounded by white rocks. The beach is made of medium-sized bushes, which are wholly white and give the best glitter in the summer sun. That's why the color of the sea is special here. The sea is clean and pleasantly warm, and the beach itself is very affordable. Getting to the sea is gentle and suitable for all people. Our beach is known to swirl waves, but not great to interfere with your bathing. If you visit us we are confident that you will enjoy it. We invite you to spend your holidays and have fun on our beach.

Vela Đirina Beach is located in Maslinica bay below the hotel Mimos and the Maslinica campsite. The beach is the largest beach in Rabac and has a flag of blue flag for the purity of the sea, the security and the catering offer. The beach is pebble and is about 400 meters long. There is a rich gastronomic offer on the beach as well as two massage salons within the beach. For the youngest there are also a small water slide and a small aquapark.

Guboka beach Rabac Labin is located in a completely natural setting, close to Sveta Marina beach. You will come to the trail through the woods and deep shade. The beach itself is made of gravel, it is very beautiful and clean. The sea here is calm, comfortable warm and extremely clean. On the side is the rocky coastline overgrown in the greenery, which gives an excellent contrast to the blue sea colors. Cities of Pula and Poreč. Both cities are rich in their cultural and historical sights and strong tourist offer. 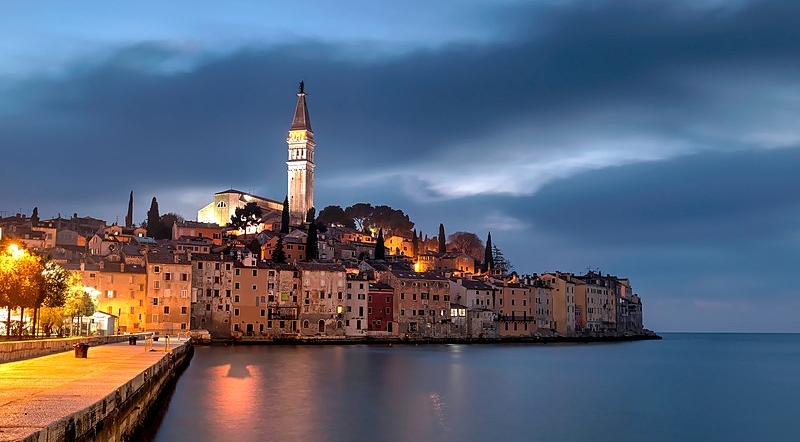 What to see around the Rabac - Labin area,...

What to see around the Poreč area

What to see around the Opatija area

What to see around the Pula area
Upgrade this article