﻿ What to see around the Crikvenica area

# What to see around the Crikvenica area

We bring you a list of the most famous sights and locations you need to visit if you are in Crikvenica or the surrounding towns and cities in the Kvarner region and suggestions for working in Crikvenica.

Crikvenica Surroundings - what to visit

Crikvenica is a town in western Croatia, located in the Kvarner Bay. The town consists of the towns of Crikvenica, Dramalj, Jadranovo and Selce. In the past, Crikvenica had the function of a port for smaller Vinodolian settlements in the interior, the Franconian centers of Bribir, Grižane, Drivenik, Tribalj and some others. Today, this town is facing tourism, and is one of the most beautiful tourist destinations on the Croatian coast. The Mediterranean mild climate that prevails here and the clear sea of ​​pleasant temperatures have made Crikvenica an exceptionally health resort. The small town of Kvarner has become a short time of top destination during the summer tourist season. Crikvenica is also favored by the proximity of some major cities such as Rijeka in the north, and Zadar a bit further south. The Crikvenica Riviera offers many interesting things, so there are also active holiday fans, as well as those who are looking for a relaxed and quiet holiday. The vicinity of Zagreb particularly favors Crikvenica because it is the favorite destination of many of Zagreb, especially during the weekends. Kilometers of sandy and pebble beaches best describe the rivers of this city. They are linked to a natural promenade, enjoyed by a large number of foreign and domestic tourists. The Black Molo Beach is part of the sandy beach, the Town Baths of Crikvenica, about a kilometer and a half from the city center. The beach is known for its shore and sand, making it an ideal gathering place for families with children and picigin lovers, and during the season an aerobic is also organized in the water. Other sports activities include beach volleyball, slides, mini golf, water skiing, jet-ski. The beach abounds in natural shade due to centuries-old pine trees along the promenade. Beach Podvorska Crikvenica is a beach where pets are allowed and is considered as one of the best beaches for dogs in the Adriatic. On the beach there are a canopy and shower enclosure intended exclusively for four-seater swimmers. The beach is pebble and is ideal for families with children to rent deck chairs. The access to the sea is gentle and the view of the island of Krk nobody leaves on indifferent. On the beach you can find a large number of facilities and catering facilities, renting a sun lounger costs 35kuna / day. Plaža Kačjak is located in Dramalj, a few kilometers north of Crikvenica. The beach is pebbly and rocky, and there is also a small bar where you can refresh yourself. Part of the beach is specially designed and designed for nudists and has an official FKK mark. The nudist beach is located on the rocky bay. See all FKK beaches in the Kvarner region. Beaches in the vicinity of Crikvenica (Kvarner)

The island of Krk - Golden Bay Beach, or as some call it Velo Čelo and Biškupići, is a beautiful gravel bay situated on the west coast of the island of Krk, a few kilometers north of the town of Stara Baska. Due to the high steep foot, it is not possible to reach the beach so the only access to the beach is by boat, which is why it is popular among sailors. The Golden Beach is shown on numerous brochures on the island of Krk. In addition to this beautiful bay, another bay is located next to Old Bay, the popular Oprna Bay. Vela Beach is located in Baška on the south of the island of Krk. The beach is sandy - pebble, 1800 meters long and is among the most beautiful and famous beaches in Croatia. Around the main beach there are several hotels and a large number of apartments, restaurants, bars and other tourist offer of Baška which this beach is the strongest tourist attraction. Since 1999, the beach has been labeled Blue Flag because of the purity of the sea and the rich offer on the beach. Beach Pudarica is a sandy beach and the first beach to catch you if you come from a ferry from the port of Mišjak and is one of the most beautiful on the island of Rab. The beach leads to the beach so you can reach it by car. On the beach there is also the most popular night club on the island, Santos club.

Paradise Beach in Lopar is the most famous and the most beautiful beach on the island of Rab and one of the most famous beaches on the Adriatic coast. The beach is known for its size (about 2 km long), sandy bottom and very shallow, which helps to heat the sea temperature, which is on average a few degrees warmer than on other beaches. Because of the large sandy beaches on the beach, it is very popular to play volleyball on a beach whose beaches do not miss. In addition to sports activities there are a large number of catering establishments working in the summer and amenities for enjoying the beach. The beach is also popular with CNN among the top 100 world beaches. Kozica Rab beach is located at the foot of the gazebo between Supetar Draga and Lopar. The beach is pebble and is situated among low-lying vegetation. The beach is not easily accessible, you can sail by boat or you can go down to it if you come off the road on uneven terrain and on a large slope, but this is also a great beach advantage because summer is not too crowded, which is a challenge for those brave. If you are a fan of naturism, Rab is the best place in Croatia for you due to the large number of nudist beaches. Here are some of them.

Sahara Rab FKK Sahara Beach is located in Lopar, on the island of Rab near one of the best beaches in Croatia - Paradise Beaches. The Sahara is a FKK, a nudist beach and is completely sandy. In the background of the beach is the pine forest that gives the beach a special experience and provides shade for guests who want to hide from the sun. There is no beach on the beach so you have to take it all with you. FKK Stolac Lopar Rab In Lopar on Rab you can find 3 nudist beaches, Sahara, Ciganka and Stolac. Stolac beach is located next to the Stolac islet, which is near the shore, and as the shallow beach can be walked to it. The beach is hidden among the rocks, providing privacy and the ground is sandy and rocky. The beach can only be reached by foot through the forest or boat. There is no content on the beach. Ciganka Beach Rab Ciganka is a sandy beach in Lopar on the island of Rab, one of the 3 nudist beaches in Lopar, near the Sahara and Stolac beaches. Gypsy is the northernmost of all three beaches, located about a kilometer and a half from Lopra, which is best known for its Paradise Beach, one of the most beautiful in Croatia. 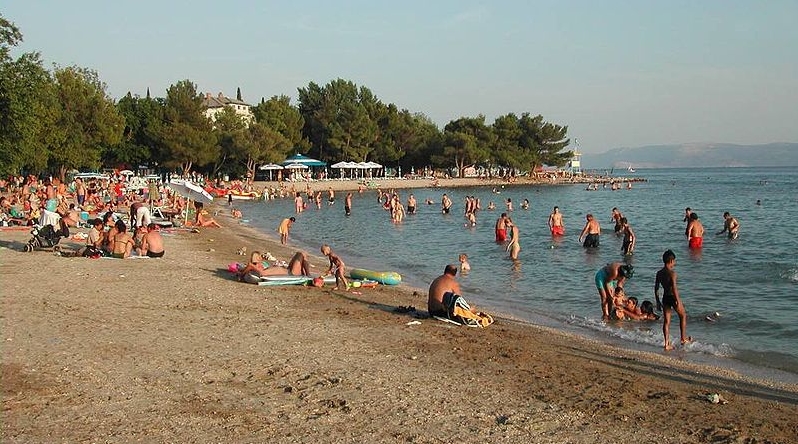 What to see on Island Krk Croatia
Upgrade this article