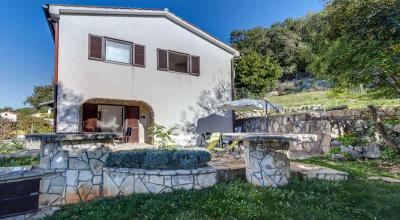 Welcome to House Erika, Porozina island Cres House Erika is in the coastal village of Porozina, 25km from Cres town. Porozina is a small port town in Croatia, located on the northwest coast of Cres. It is connected by ferry to Brestova on the Istria mainland. The old town is situated upon a hillock above the port, and in the last two decades a new holiday neighbourhood has been built. In the Classical era there was a lighthouse on the hillock above the port, that is how the town got its name. On this site today we find ruins of an old Franciscan monastery of Saint Nicholas and an old Gothic church, dating to the 15th century. The monastery was used by Franciscan Glagolitic monks of the third order, who managed to preserve Old Church Slavonic as a liturgy language even up to the 13th century. The monastery edifice was abandoned in 1843, when it was also partly demolished. Its ruins manifest characteristics of the renaissance architecture. The island of Cres has the richest vegetation in the Adriatic, also Cres has its very own fresh water lake, which is very highly guarded and illegal to swim and fish in. It supplies water to neighboring Losinj as well. It is one of the deepest fresh water lakes in Eastern Europe, going down 76 meters at its deepest point (>50 m below sea-level). The house is situated near the road and behind the house there is the forest full of wild animals, like rabbits, deers and boars, they are approaching to the wire fence and there you could see them. Cres is also one of the last habitats of rare birds – the griffon vulture. Erika has 2 levels. There are three rooms (one double bed room, one single and one with the french bed). There are also two bathrooms, well equipped kitchen, and a living room. Terrace with the cistern and open grill. The house has a fireplace and built-in floor heating, so that is possibility to stay there through whole year round, even winter. Garrage and 3 parking places. The ferry landing is about 250m far from house and there are also two caffe bars and restaurant there. The beach is about 200m far from house. For evening fun there is a Cres town, with numerous restaurants, and bars arround the harbour. Apartments House Erika, Porozina, island of Cres in Croatia. Vacation and holidays in Croatia, clean Adriatic sea and beautiful nature. We present to you; House Erika Porozina Cres.
Kuća